Happy Friday! We made it to the weekend

In the span of the past year, we have seen countless scams that drain the wallets of vulnerable NFT traders. From malicious links posted in Discord chats to influencer Twitter accounts getting hacked (ex. Zeneca), the methods that these hackers, or thieves, employ are very meticulously planned. Even the most seasoned veterans in the NFT space have fallen for such scams.

🥳 Excellent news for #NFT lovers, less so for scammers: Metamask is going to drastically change their “ SetApprovalForAll” Function design that has made so many victims possible to one that will raise immediate 🚩🚩🚩

Most individuals in the NFT space use MetaMask wallets in order to complete transactions. When it comes to Ethereum, MetaMask controls the wallet market share in a symmetric manner to how OpenSea controls the NFT marketplace market share. They are the current leaders in their respective NFT industry sub-categories. Because MetaMask is so heavily utilized, they feel it is their duty to inform the user of their internal mechanics on any given transaction. Most wallet-draining scams occur because individuals click “Confirm” on the SetApprovalForAll function, thus giving the hackers access to all the tokens in the wallet. With update 10.8.0, MetaMask will give users a visual alert of what their transaction is actually going to do in the background. With a brief description, MetaMask will give you a notification if you call the SetApprovalForAll function. In a way, it’s a last-ditch effort to inform the user of what their actions are going to entail. 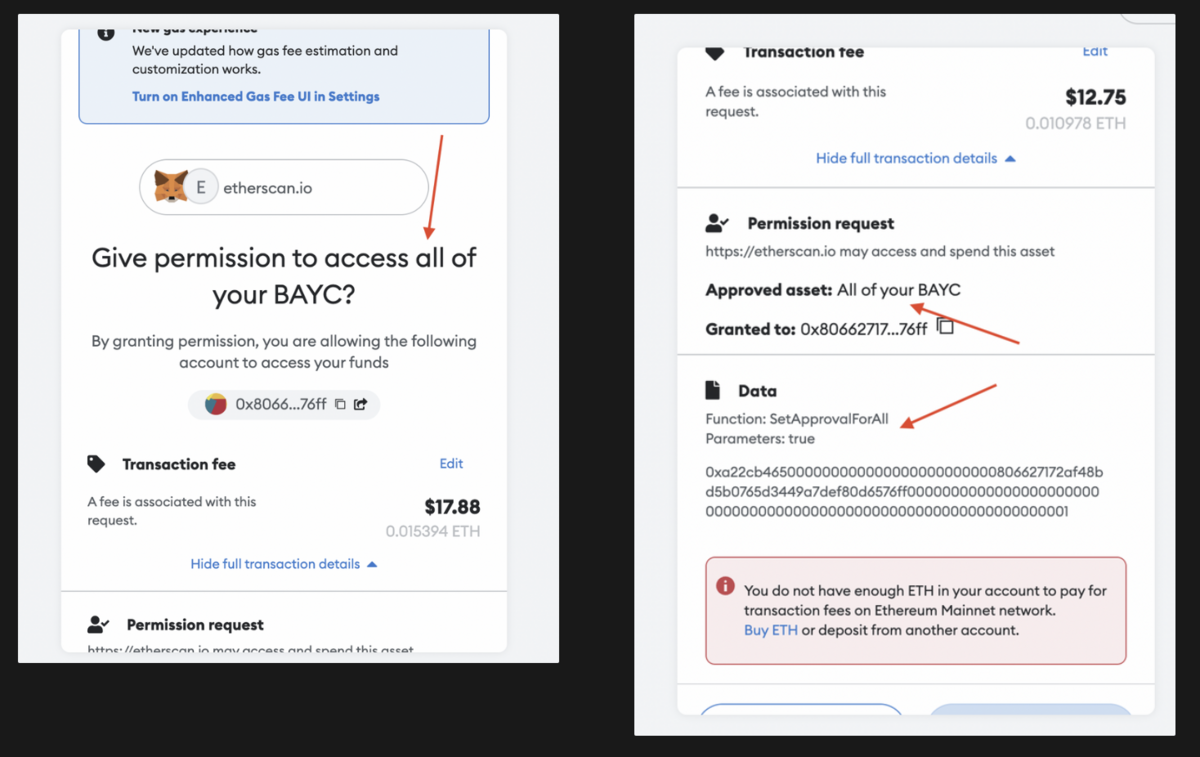 The scams get the best of many users, and these frauds generally don’t discriminate based on time and experience in the space. For example, our very own Tuna, was drained last week after a malicious link was posted in the holder-only channel of the RugPullFrens Discord. Did he do it on purpose? No. Did he learn a valuable lesson? Most definitely. If MetaMask had been updated last week, maybe Tuna would have seen the function description provided by the wallet and known that he was about to approve all of his assets. Maybe, he could’ve been saved. Maybe. Time will tell if this notification functionality actually helps. One thing remains certain: it’s definitely a step in the right direction. At least one major player cares about their users losing money (ehm ehm OpenSea) and they’re doing something about it. WAGMI.

As the fed hikes interest rates by .75% in response to a 9.1% increase in inflation, and the people in charge are busy re-defining what a recession is, buyers are flocking to the crypto markets and sending the price of Ethereum up. Ethereum gained 16% in value yesterday and is up 44% over the past month. Bitcoin and a handful of other altcoins are also in the green. While the news of Ethereum’s merge certainly contributed to its gains over the month, it doesn’t explain its most recent surge in price.

Part of what is driving investors to Ethereum, in particular, is its deflationary quality, as it essentially represents an alternative currency that doesn’t have the inflationary problems that the state-controlled petrodollar faces. On the other hand, it may be too soon to be optimistic about crypto’s positive price action. Historically speaking, crypto value depresses after feds hike interest rates, and we may see our favorite coins testing previous lows. To a fair degree, we are witnessing the speculative optimism of bulls who are buying up crypto because they expect money to flood in the very near future. But while the increased interest rate may cool inflation, it could alternatively, and quite possibly toss the economy into a recession. In the latter scenario, crypto’s price action will probably not fare well. Expect increased and unexpected volatility in the coming weeks. Although crypto should function independently of traditional markets, it does tend to track tech stocks closely. If the market falls into a recession, future-forward sectors like tech will see money drift away to more conservative bets. If you are brave enough to be investing right now, be sure to do so with enough humility to realize that your predictions and hopes can very quickly be offset by investors with wallets far deeper than yours. 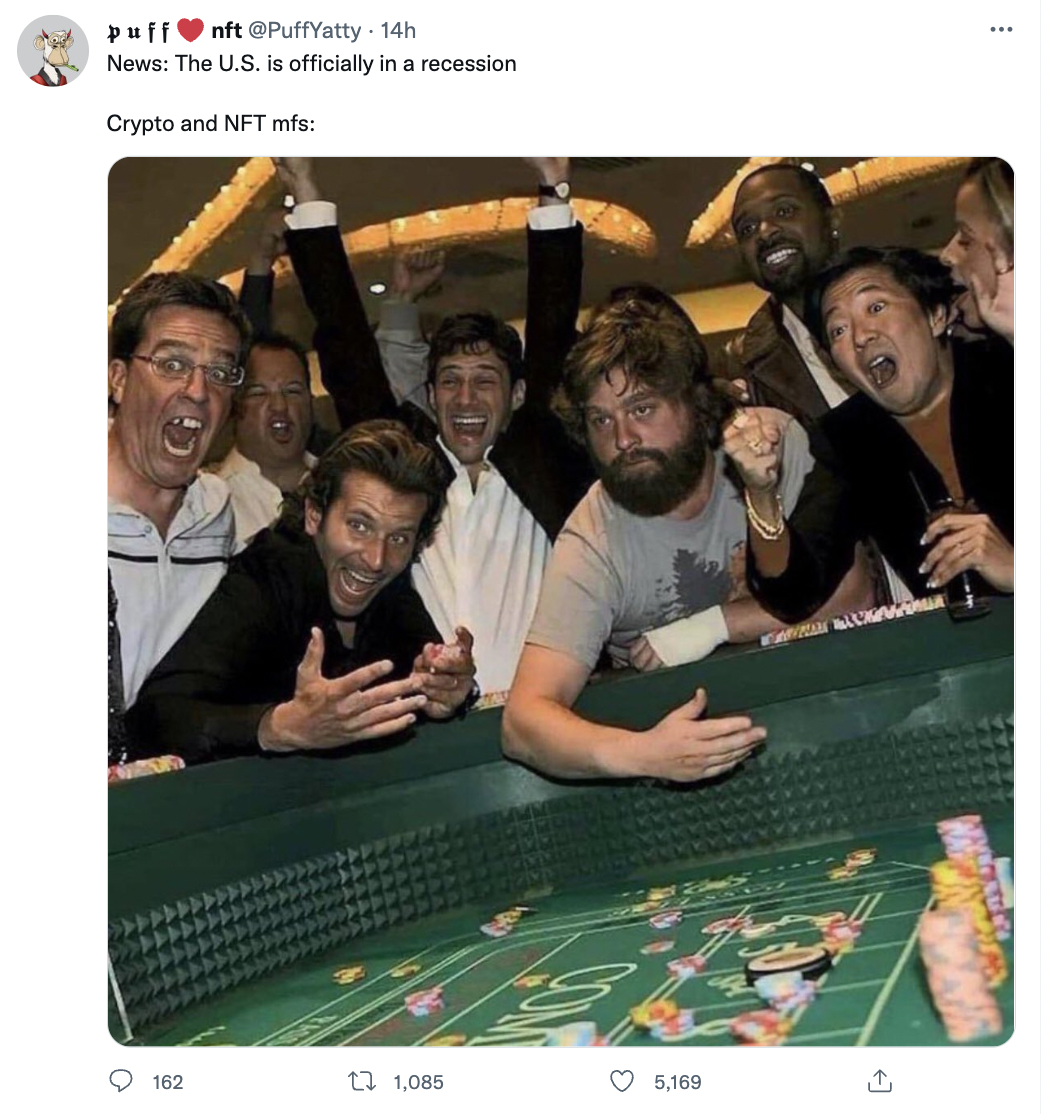 BAYC holders when they see a suspicious link 😂💀